Ozone therapy is a medical treatment method commonly used in European countries for almost 100 years. It has been used as treatment for many symptom such as, infection in the immune system, fatigue, diabetes, vascular disease, cancer and more. There are many forms of ozone therapy. However, the most common form is Ozonate Major Autohemotherapy which is a form of blood stimulation. The ozone that is used in the stimulation process is released from the Ozone Generator. The later model of ozone generator is in the form of Hyperbaric Ozone Generator. The increase of pressure from the machine allows the ozone to better combine and react with the blood.

During treatment, the doctor will draw the patient’s blood (200 milliliters (ml)) from the vein which is connected with a tube and sterile glass bottle. Then, the ozone gas from the ozone generator (40 microgram/milliliter) will be compressed through the tube and combined with the blood until stimulation occurs in both red blood cells and blood or plasma. The treated blood will be reinfused into the body, which is called 1 pass of ozone therapy (The total use of ozone is 40*200 = 8000 micrograms or 8 milligrams). The inventor and treatment pioneer of high-concentrated ozone therapy was an Austrian obstetrician, named Dr. Johann Lahodny. In his treatment protocol, he increased the number of passes of blood therapy from 1 pass to up to 10 passes for each therapy. In each time, 200-220 ml of blood was used with the ozone concentration of 70 microgram/milliliter. This can stimulate the quantity of blood up to 2000 ml or 2 liters or the quantity of ozone of up to 140,000 microgram or 140 milligram, which was much higher than the standard or 1 pass protocol by 17.5 times.

Dr. Lahodny found that this High Dose Ozone Therapy provided excellent clinical results in chronic infection diseases or latent infection diseases, such as rheumatoid arthritis, lupus, Lyme disease, many other forms of chronic diseases plus diseases in the metabolic system, like diabetes and cancer. 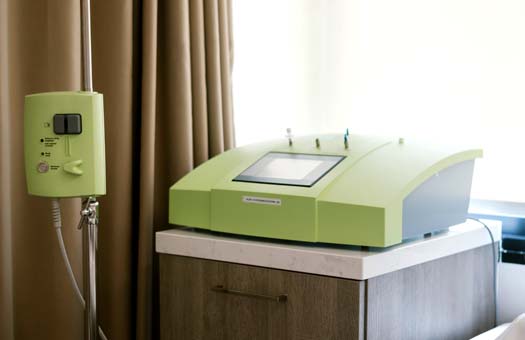 1. Drink an extra liter of water on top of the recommended daily in take of 3-4 liters, 2 days before the treatment.

2. Before receiving the treatment, inform the doctor or the nurse of the medicine or food supplements that you have taken.

3. This treatment is not recommended for pregnant women.

4. This treatment is not recommended for patients with abnormal blood clotting issues, such as abnormal thrombocytopenia or hemophilia.

5. This treatment is not suitable for those with hemolysis, such as G6P Deficiency (G6PD).

6. After the first 12 hours of treatment, prolonged bleeding may occur. Therefore, it is not suggested to exercise or do any activities that are prone to accidents. Plus, it is not recommended to perform this treatment before any planned surgery by at least 2 days. Wounds must be dressed reasonably tight around the infusion site for at least 6 hours.

7. After the treatment, the patients may feel flash or may experience slight irritation under the skin due to the response of the ozone that affects the expansion of blood vessels.

8. In some cases, patients may also experience fever because the immune system is stimulated. The body temperature will commonly increase as the white blood cells get ready to eliminate or fight the triggered “infection”.